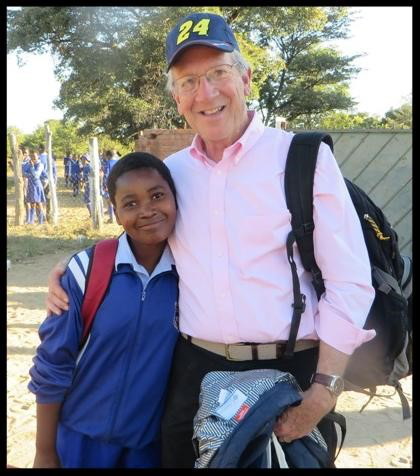 Discover what impacted Terry Ortman on his recent trip to Zimbabwe, where he was training teachers and teaching children.

What motivates Terry Ortman, who in his mid seventies is jumping on airplanes to travel into unpredictable situations in distant lands?  His bed may be a cement floor or a two-inch-thick mat.  The food is rarely what his wife, Doris (a great cook!), feeds him at home.  Caution must be exercised when it comes to drinking the water. Sometimes a shower consists of dumping a bucket of water over his head.

Still, he never complains.  Whether blistering hot or bone chilling cold; dry and dusty or rainy and muddy, Terry is found with a cheery spirit.  Why?

Born in South Africa, she was then a sixth-grader living in Zimbabwe when she caught Terry's eye.  What struck Terry was her impeccable English.

Intrigued, Terry asked questions.  He learned that her mother had fled to 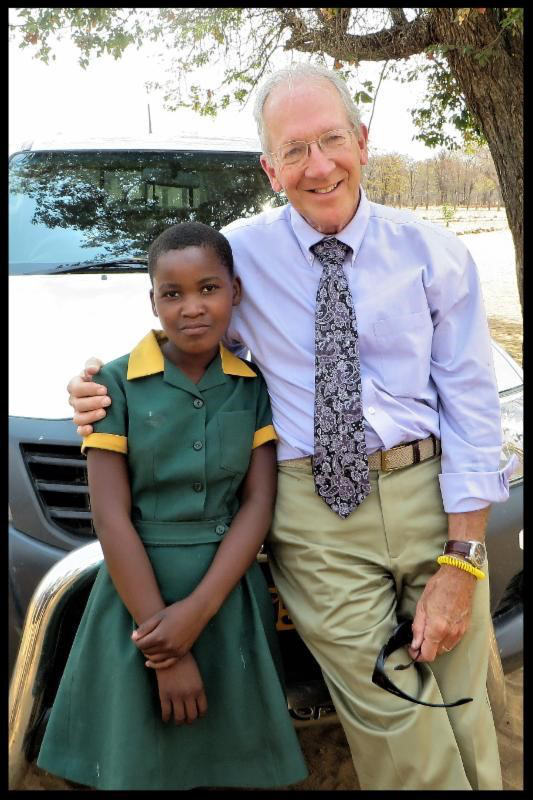 Zimbabwe to escape an abusive husband, whose violence spilled over onto Amanda.  While there, however, Amanda's mother died and she was raised by her grandmother in the remote area of Khumbula.

Terry learned that her school fees were in arrears. He and his cousin, Carol McDonald, who at times travels with him, paid her fees so that she could complete primary school.

It is now two years later (May 2017) when Terry and Carol departed the late spring of America to enter the winter of Zimbabwe.  Terry was once again training teachers and teaching students.  One day, as he was walking across the secondary school grounds, he heard someone excitedly shout, "Hello!"

He turned to see Amanda smiling brightly with the ring of joy in her voice.  Their investment into her education was really a gift to her heart.  Amanda exhibited the signs of maturing in her academics, but much more in her spirit.This caused Terry to reflect upon the importance of his grueling travels.  He wrote:

"The foundation of my ministry is to equip teachers with biblical principles.  I spend time demonstrating how to integrate these truths into subjects as well as games.  I always teach them, "Jesus Loves Me" but in an animated manner that may feel awkward to the teachers but is fascinating for children.  Above all, I emphasize the importance of learning to love Jesus as their personal Lord and Savior.  We may never know the impact we've had until we're in Heaven.  Meeting Amanda energizes me to press on."

The impact that the Gospel can have on these young lives is truly amazing.  Terry and cousin, Carol, were invited to attend a funeral of an eight-year-old boy who died of a brain tumor.  Terry says: 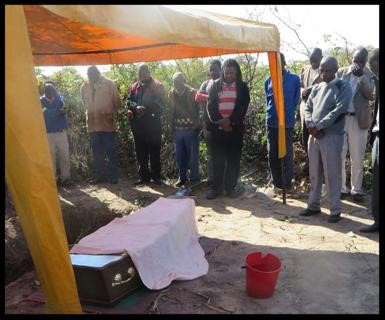 "We didn't know this youngster but from the service we were sure that he knew the Lord and it made it clear to us that sharing Jesus with these students as young as four-years-old is of great importance, especially in a society lacking in good food, clean drinking water and adequate medical facilities."

Earlier this year, Terry traveled to Sierra Leone where he jump-started a Bible-based curriculum that had languished during the frightful days of the Ebola epidemic.  An entire year of schooling was robbed by the crisis, as well as many lives lost.

While most people Terry's age enjoy retirement, he thrives on "refirement."  When at home, his heart and thoughts remain with those children, who gleefully receive him with wide eyes and open hearts and swarm around him like bees around honey.  Soon again, Terry will pack his "Indiana Jones" luggage and fly off to rugged conditions where he will be met with a flood of loving and appreciative hearts...both by teachers and children. 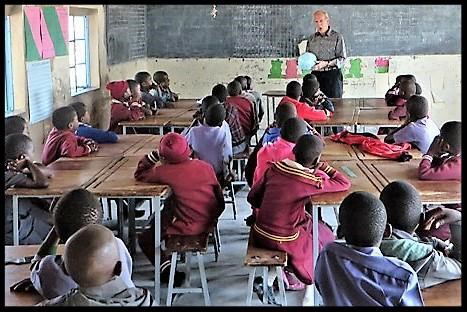 Our commitment as a ministry is focused on fulfilling the Great Commission by presenting the pure and simple Gospel.  Our vision is to encourage and equip one million people to bring 100 million to salvation.  You can see why we are thrilled to have Terry in his important role of birthing this vision in the hearts of the on-coming generation!

Thank you for praying for Terry.  And thank you for your commitment to support and uphold this ministry.  May the Lord richly bless you for sharing in the work of the Great Commission!

God bless you, my friend,

Terry and Doris Ortman live in Chambersburg, PA. with their dog Tosca and cats, Sibelius, Salome and Stravinsky. Both are involved in fulltime Christian ministry as faith supported missionaries with Susek Evangelistic Association (SEA), Gettysburg, PA
Terry’s ministry with SEA has taken him to three continents and the Pacific Rim. Doris speaks and sings for various organizations as well as plays piano in church and directs the J.O.Y. (Just Older Youth) Chorale, a senior citizen choir in Franklin County, PA.

Your comments will not appear until they have been reviewed.